Caroline Frazer joined Rotary Soiree in September 2016. She was motivated by her desire to get involved in a charity organisation that could make a difference to people locally, and along with friend Philippa, decided to give Rotary a go.

She has recently given up her work with the Citizens Advice Bureau, where she worked for 20 years, and where she drew on her one to one people skills, and had spent a lot of time working with vulnerable people, helping them to find resources to get their lives back on track. She now spends her days concentrating on the admin side of family business, husband Guy has his own independent financial advisory business. She is enjoying having some spare time some to do the things she wants to do, which includes giving her time to causes she is interested in, as well as travelling, and visiting her home in Spain during the summer.

She would certainly like to work on a Rotary project where she could be more hands on, and feels that some of the smaller charities, could really benefit from the skills of Rotarians.

WHAT IS SHE ENJOYING ABOUT ROTARY?
Caroline feels that she is still learning about Rotary, and her first year was really about finding her feet. She enjoyed attending the Conference in Bournemouth last year, and felt it helped her to get a better understanding of the extent of Rotary’s work, and it’s International reach.

More recently she has become a proactive committee member, as part of the Service committee.

She thought the Presidents Summer Party was particularly enjoyable, and that Tottington Manor was a lovely venue, and a perfect setting on a pleasant summer’s evening.   She has also found some of the speakers stimulating, and bought her daughter along to hear Chris Tomlinson speak about the Rampion Wind Farm, which they both enjoyed.

She also liked the fact that Rotary raises funds for local charities and organizations, as well as supporting International projects.

WHAT WOULD MAKE HER EVEN HAPPIER TO BE A MEMBER OF ROTARY?

She is keen to be involved in a more hands on way, with a local charity, preferable working with vulnerable people, and so she would like to understand more about ways of reaching out to a local charity, and how as a Rotarian she might be able to help. She appreciates that fund raising is important, but would also like to be a more proactive Rotarian, working more directly with a small local charity, and where we can make a real difference.

WHAT SKILLS DOES SHE HAVE TO OFFER ROTARY?

Caroline is a real people person, and before working for the Citizens Advice Bureau, she ran her own confectionary sweet shop business in the centre of Brighton for 10 years, it was a real community gathering place, and she feels bringing communities together, and working face to face is a real skill.

She has done night shelter work, sitting with homeless in the evenings, and her work with CAB bought her into contact with people from all walks of life, who needed help in some way. She innovated a number of projects for example – the local housing allowance project, , started when the payment system changed, and people had to learn how to manage and pay their own housing benefit, rather than it being paid directly to the Landlord.

She is also a good problem solver, and she was part of a CAB team going into schools teaching young people how to be financially aware, and manage their future finances.

She was also a trainer for CAB, and supervised and supported younger advisers. By far her most challenging work with CAB, was working with Macmillan, in the lung cancer department, those diagnosed were given the opportunity to speak to dieticians, therapists and also CAB… and they were there for the families as well.

Her son Matthew and Daughter, Rebecca run the Tempest Inn on the seafront http://www.tempest.pub/   and they have recently taken over the Old Albion, on Church road, https://www.oldalbion.pub/ with a great Gin bar, she feels there might be an opportunity to use these venues for a fundraising event, and would certainly welcome any suggestions as to how Rotary could benefit from having access to these venues.

Her children also have a food truck that is set up in the Spiegeltent as part of the festival. So lots of possibilities for fundraising events.

In her spare time she often finds herself looking after her 2 grandchildren, or riding her motorbike around town, playing mah-jong with her old colleagues from the CAB, working on her allotment in Hangleton, or keeping up with her Spanish. Although she has Spanish family on her father’s side, she is not a native speaker, but once she is back at her home in Spain, it all soon comes back.

She is also currently spending time caring for her Mother.

But when I met with her she was just about to head off to Rome where youngest son Theo, a graduate music teacher at Kind Edwards School in Witley, was off with the school to sing in St Peters Basilica in Rome.

Enjoy your trip Caroline and thank you for your time. 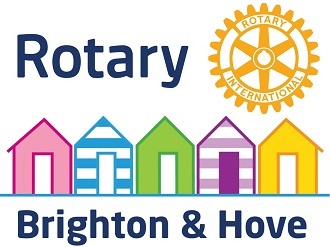 Thanks so much for your amazing generosity in January 2022! We collected around 900 trees, and we are planning to END_OF_DOCUMENT_TOKEN_TO_BE_REPLACED

Santa will soon be out on his sleigh in Brighton suburbs collecting for local charities between 6 and 8 p.m. END_OF_DOCUMENT_TOKEN_TO_BE_REPLACED